Looks like May is one of the winning months for Kenikodjo. Yesterday morning, we went past 120,000 views. Yes, 120K!!! As one of my friends will say, Chai!!! And like I was telling everyone on Facebook, Twitter and Instagram, if everyone who has ever viewed the blog could just send me 1 cedi/dollar/pound/euro/naira, I could build a house! We could call it the #GiveKeni1 project. What say ye? 😉 On to the next goal-250,000! Who’s with me? A thousand thank yous to all those who wrote articles about me and the awards. It was all very humbling and flattering! 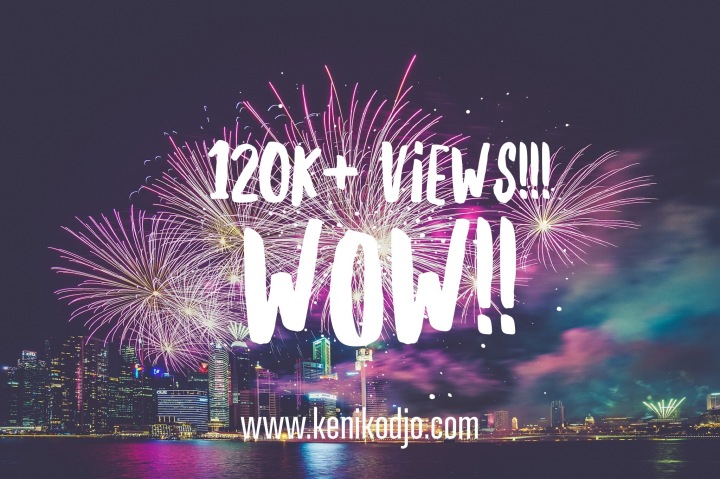 Tonight, I am speaking on the Capital Series at the June edition of Blogging Ghana’s #BytheFireside at the Impact Hub in Osu. You could  follow the conversation on Twitter with #bythefireside. Exciting times ahead! I have been very restless this week- maybe it is just my body telling me that it is tired of troskis, maybe not. I asked myself this question and I leave it for you as food for thought- Are you courageous enough to fearlessly pursue your dreams? -Keni ❤

‘We missed you in class last week.’

‘I didn’t know you took attendance.’

He winked at her before draping his towel over the horizontal seated leg press machine.

Why are you winking at me? Don’t you know it makes my legs turn into melted margarine in Auntie Abena’s hot sugar bread? At this rate, I don’t need a workout. My heart is racing, all thanks to you! But why do you have to be so fine? And why am I dreaming about you? Your abs look even more glorious in my dreams.  Why did you notice my absence and go ahead to tell me?Why do you look so much like Tim? Are you his evil twin? Or your memory was wiped blank and you don’t remember me?

Yes, she wanted to say all this to him and even touch the abs if she could, but no, she didn’t. She smiled casually, willed her heart to freeze back into solid state and got into position. The workout was good and she could feel her inner thighs punishing her for skipping two days. But how was she supposed to walk into gym class and watch Paa Kow get sweaty in front of her, especially after the dreams she had had? Today, it was extra difficult to concentrate because every time she looked up, their eyes met.

And it was fire. Blazing. Unrestrained. Hungry.

Paa Kow’s number one rule was not to get emotionally engaged with any of his students. It was the basic rule for the kind of job he did. This was why he always turned down offers from women for private tuition, no matter how much they were offering to pay, because the moment he walked into a woman’s home, her motive moved from staying fit to getting him into her bed. And it wasn’t that he had never been tempted- he had. But he knew better and so did they. That would probably explain why they didn’t push when he said no ever so politely.

But then there was Tonia. If she asked him to come to her house and just watch her sleep, he would gladly do it. There was just something about her.

His calm 6th sense was flashing warning lights and yet he shut his eyes to them when he asked her for her number.

‘Yes, you heard right. I was wondering if I could call you sometime.’

‘Isn’t that against gym instructor-client code?’ It didn’t stop her from smiling and he took it as a green light.

‘You look like you are worth breaking the rules for.’

Tonia was grinning like a Cheshire Cat in a toothpaste commercial as she headed off to the bathroom.

Tonia was having fun. He was funny-funnier than he looked. Witty. He was like Tim but different. It was a good different. She decided that it was time to test the waters.

‘Just so you know, I don’t cook, don’t like kids, don’t want to get married and I am not a virgin.’

‘Just putting it out there while it is still early days, so that you can run away if you want to.’

‘Do I sound like I want to go anywhere else?’

Tonia victoriously punched the air and then continued the conversation as calmly as she could.

Paa Kow knew he was accelerating. Way faster than he normally would, but it was thrilling and she was bold. Before he knew it, it was 3am and they had been talking for 5 hours straight. And even without sleep, her laughter was- as cliche as it sounded- music to his ears. Adele standard.

They had finally gotten round to making up- Peter and Ewuraefua. Peter had come back home and apologized for walking out. Ewuraefua had apologized for being selfish. All was okay  with the world and Ewuraefua was lying with her head on her husband’s hairy chest, cheerily going on about the details of the Kafui episode.

As soon as he heard  Tonia’s name, he stiffened subconsciously. Thankfully Ewuraefua didn’t notice and went on and on about how callous Prosper was. Peter knew why he avoided Tonia. He also knew that he could never tell Ewuraefua the truth- it would break her heart! It was an accident, honestly and even now, he had no idea how it had happened. Tonia was watching over the kids one day  and he had come into the kitchen to get a glass of water. Everything else had happened very fast- before he knew it, he was kissing her neck. At some point, she said ‘stop’. He heard it but he was on a roll. Finally, after what seemed like 10 years, she pushed him away,grabbed her bag and ran out of the house. He knew why she could never look him in the eye after that- despite the fact that it should not have happened, they both enjoyed it. Way too much.

See you next week! Enjoy the month of June!

Don't keep it to yourself!

Storyteller at kenikodjo.com, a repository of Ghanaian stories. If there is a Ghanaian experience, chances are that I have written a story about it! 🤩 View all posts by kenikodjo

Determined to reach you wherever you are! You can now subscribe to the Kenikodjo Stories Channel on Telegram. Just search for Kenikodjo Stories on Telegram or DM us. We will send you the link to the channel!
Listen to the gifted voice actor @fremekwame read one of his favorite #Kenikodjo stories- the Barbershop. Happy listening! 🎧
Life update!
Let’s kiss and make up, shall we? 🤗
We will be back before you know it! 🙏🏾 #AkosuaRona #Kenikodjo #KenikodjoSeries #KenikodjoStories
Four years ago, I updated the blog description with the words ‘award winning’. The blog became a big deal. My favorite thing about these awards is how strong the community around me was. My family and friends bought tickets and filled a whole table even though they didn’t know if we were going to win. Someone offered me shoes, another person gave me earrings and a matching bag. People designed posters and got everyone in their family to vote. People tweeted and tagged, tormented their WhatsApp contacts.These awards will always be ours, because there is no way I could have done this on my own. I am so blessed to have you all in my life!

One year strong! Hearty congratulations to the Boamahs! 😍
Vintage loving 🥰 with @d_knb and @naa_momo10
Soft work for the LV lovers! ❤️🧡💛💚💙💜
ETERNAL ACE for Kwabena and Abena! @lisa.ling
Kwabena and Abena!
Every love story deserves to be told- this has been our mantra here at @vowsbykenikodjo!

Merriam-Webster’s Word of the Day